So family, it is time. It is time for the final post of the year, the one you've been waiting for...the roll call! In case this is your first year, I started this in 2007, as a way of giving a shout out to those who make my existence of being a Mets fan special. Sure, the team and the laundry has a way of doing it...but the people around me make it all better to root for the home team.

This year is also unique for a reason.discount jerseys I am making a very special announcement that this particular Roll Call is my final one. Yes, I have decided that after four seasons of blogging, that I am officially hanging up my cleats and this will be my last post on My Summer Family. 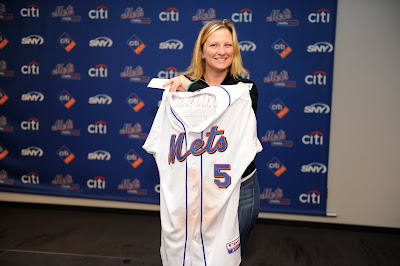 When I started this site back in 2007, I had a unique voice. I talked like a truck driver, but could provide a "softer" (if you can believe it) steelers jerseys cheapview of baseball and of my team. In some respects, though I am a grown woman, I still view the sport through the eyes of a child. Though my cynicism with being an adult does cloud my vision for some, it has occurred to me recently that my "potty mouth" as some have taken to call it bothers some people. To them I give them a big middle finger.

This in no means reflects my status as a Mets fan. I've been around for a long time, I'm not leaving any time soon. In some respects, though, I feel like blogging as an art form is dying off. Not that they still can't be relevant. But nfl jerseys cheapin the vein that any schmoe like you and me can just open a blogger.com account and start writing and consider themselves a "blogger." I mean, you are, but I had no idea that I would become "credible" when I started something for fun a few years ago (as an example, being one of the featured blogs in the Maple Street Press in 2010 - how'd the heck did that happen??? Or being asked to participate in an Amazin' Tuesday, an accomplishment I will always be proud of).

Once I believed that I wasn't doing jerseys wholesalemuch that was compelling, I refused to go out with a whimper and not with a bang instead.

In the meantime, enjoy my final post of the year.

In no particular order I would like to thank the following folks for a good year and great friendship, all stemming from the fact that we root for the same team!

Baseball chicks were in the forefront this year, and we certainly rocked the house.

Thank you to Chap for a memorable drive-by of Port St. Lucie. I hope that not only we won't have the timing constraints next year, but that it won't be blizzard conditions when we take off. "Everybody ON THE PLANE!!!"

To the PAC Lady, who brings baseball (as a Mets fan) and rocking (as a music fan) to a new level. We should all be as devoted as you.

To Julie at Chicago Met Fan, I really cheap jerseyswished we could have had that game this year! Here's to hockey...and football...and everything in between.

To Miss Dee Wrighter, for making a baseball chick into a baseball sister.

To Rainiedazze, Carlos Beltran fans pale in comparison to you. (PS I usually reserve these posts to people I've physically met, but we already know our trip is to Arlington next year!)

To Jessica_Teresa, whom I had the opportunity to meet at Telecom-Conglomerate-Name-Here Park back in July, I hope to see you on the Shea Bridge next June!

To kBoTTi, she who laughs last laughs hardest. So I hope you are having a good guffaw over that Biscuits-and-gravy type on that team in Arlington right now. (PS Hockey chicks rock too)

To LadyMets, for making a minor league game fun as all anything and for being the baseball chick (emphasis chick) you are.

I went on many road trips this year. Five road stadiums and I had been to four of them already. I had a partner in crime this year for all of them, but I had the opportunity to meet with Team Doster at CitiField and at PNC Park. Hopefully, I can return the favor at your home next year (Great American Ballpark!).

My counterparts on the west coast: the Sollies! I do love them so. Y'all gotta come out here next here though, ya dig? RAWHIDE!!

The guys from Metszilla, namely Vinny whom I had the opportunity to meet with on the bridge. Love these new sites that keep making the Mets community a rich one.

To Rich S, thanks for the beer you would have bought me, but I'm sure the one we will meet up for in 2011 will be just as tasty!

To John Delcos, whom I always admired from a journalistic standpoint. Keep fighting the good fight and I'm very happy to know ya!

If someone had told me that if I started blogging, I would get a husband out of it, I would have told them to get lost.

We met on Facebook in 2009, and became friends. We met face-to-face at CitiField on Build-A-Bear Night in 2009, and our the spring of our relationship's seeds were planted in the winter. I managed to get married without telling many people until a month afterwards. Folks, I am living proof that your dreams can come true. And every day, I have a man who wakes up in the morning just to cherish me. And he's a Mets fan to boot!!

I'd also like to take this opportunity to thank my blog-spirations. I often say if not for my haters, I wouldn't have a site but that's not entirely true. If not for finding some of these folks in as early as 2004, I'd have never had a "forum" voice (meaning: I was once a blog groupie) and therefore, would have not opened my own blogger.com account four seasons ago.

To Metsgrrl and Faith and Fear in Flushing, I aspire to be like these writers every day. And every day, I fail so miserably at it.

To Mets Today and the brains behind it, Joe Janish. I thank him for always being at the ready when I need a quick stat or need to defend the ghost of Aaron Heilman.

To the Kranepool Society, this is the yin to my yang. Look no further than this site for the Godfather of shooting from the hip. I'd like to think that My Summer Family was the long lost two-headed love child of this site, as we both never gave a flying fuck what others thought of us.

THE Metstradamus, who can always make us laugh, even when there really isn't much to laugh about. Metstradamus makes hate the backup National Pastime.

To Metsblog and Metsmerized Online (where I will still be contributing) for linking to me and taking me seriously when no one else would! Thank you for all the support in the past.

My family over at Brooklyn Met Fan. There's "My Summer Family" and there's the true value of a baseball community that is a family in and of itself. From BMF himself, to Blondie's Jake, Matt the Met Fan, Irish Mike, Joey Brooklyn, Fort Greene Met Fan, El Duderino and countless others, these guys make me so happy to be alive and that I am proud to call them my friends. Hope to see you at the next Jake-a-Palooza!

Some of them have gone...Toasty Joe, Ed in Westchester and You Can't Script Baseball. We really had a great bunch of writers back in the day.

And lastly...has anyone kept in touch with the motley crew over at the old The Metropolitans? This was authored by a fellow named Mike Oliver, and had such loudmouths in there such as Benny Blanco from da Bronx and the old Chuck Norris League. This was really the reason I started blogging and was the first community I found myself involved in. I really modeled my blogging style after this site.
http://horrorfc.withme.us/t85-topic
Well, folks, there you have it. This is in no means "Goodbye." The Coop is taking some time off to reinvent herself. In the meantime, please follow My Summer Family's fan page on Facebook where I will still have a presence and be posting some random tidbits and wise-ass remarks intermittently. I will post updates on where to find me and my writing, and on Twitter, where you can certainly see me screaming about the Jets and the Rangers in the offseason. I have a small presence on Tumblr as well, that I am hoping to build up over the course of next months.